Building Progressive Zionist Activists: Exploring the Impact of Habonim Dror, authored by Prof. Steven M. Cohen and Steven Fink describes evidence of the life-long impact that the Habonim Dror youth movement has had on its participants.  The report draws upon a survey of nearly 2,000 alumni of Habonim Dror camps and other programs, ages 20 to 83. 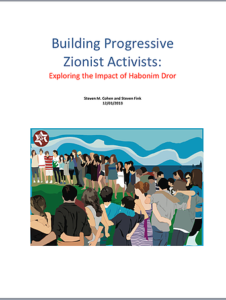 Dr. Cohen sums up the study findings.  “The Habonim Dror experience often seems to exert a powerful impact upon identification with Israel long after the alumni have completed their active involvement in the movement.

Significant involvement with Habonim Dror is also associated with developing progressive political values in both the American and Israeli context, and with lifelong bonds with the Habonim Dror friends of one’s youth.”

Jerry Silverman, President/CEO of Jewish Federations of North America, after reviewing a draft of the study, shared that, “when he was CEO of the Foundation for Jewish Camp, the organization conducted a survey of Jewish Federation executives across North America. The FJC discovered that more sitting Federation executives came from Habonim Dror than from any other camp movement. It was a strong statement to the leadership-building nature of the Habonim Dror camp model.”

Hasia Diner, Professor of American Jewish History at New York University commented, “Habonim taught us to think critically and even as youngsters our madrichim (counselors) pushed us to participate in adult-level debates. It is not surprising that so many of us became academics, writers, and individuals involved professionally in analyzing how the world works. Even among my fellow American Jewish historians, an inordinate number come from the ranks of Habonim graduates, shaped as we were by intense Movement discussions which had no parallels in our ordinary school lives.”

Nigel Savage, Hazon’s Founder and President, said, “This is an incredibly significant study, because of the length of the time period that is being covered. The impact of immersive experiential education is persistent – it has an impact in many cases years and decades after the experience itself. And I see this literally on a daily basis – there are a slew of Habonim alumni playing a key role in Hazon at both the staff and lay-level.”

Harold Grinspoon – Global Jewish philanthropist and founder of JCamp 180 and PJ Library shares, “The findings of Dr. Cohen’s study come as no surprise to those of us who have been interacting with the Habonim Dror Camp movement for some time. The strengths of the Habonim Dror organization are in the leadership roles that it offers to its youth and that the campers’ responses to these challenges of leadership result in the Jewish values and identification with Israel, often first encountered at camp, lasting long beyond the camp experience.”

Jeremy J. Fingerman, CEO, Foundation for Jewish Camp shared, “Habonim Dror is continually working to remain a strong, relevant force in the lives of young people and, as this study confirms, clearly these efforts are paying off.  The Habonim Dror camping system – seven overnight camps across North America – shows vitality, growth, and impact. We are proud to partner with them creating summers that have a powerful effect long after a camper’s last summer.”

MK Isaac Herzog, Newly Elected Chair of the Israeli Labor Party, Leader of the Opposition in the Knesset (Former Minister of Social Welfare) said, “Habonim Dror is one of the most successful ventures connecting Jewish youth to Zionism for generations. It is an idealistic movement that identifies with liberal Israeli society, while creating the right formula for cultural Jewish continuity. In building kibbutzim and moshavim, Habonim Dror made an important contribution to carving out the borders of Israel and providing the backbone of Israeli society. Today they continue that effort with their urban kibbutzim and I commend this study of their ongoing success.”

Ken Bob, President of Ameinu says, “The results of the study related to identity with Israel, progressive politics and leadership development confirm what I have seen in my own experience.  In both Israel and the American Jewish community, the fingerprints of Habonim Dror are evident in a wide a variety of settings.  On a personal level, I credit Habonim involvement with contributing to my success in both business and not-for-profit worlds, as well as providing me with the tools of critical thought and analysis.  I am fortunate that Habonim Dror has become a family affair, with two of our children living in Israel on new Habonim Dror urban kibbutzim.”

Joel Winograd, Chair of the Habonim Dror Camp Association shares, “We are happy to see this study demonstrate the effects Habonim Dror has in shaping the next generation of Jews in North America.  The immersive experience of Jewish camp coupled with our belief in and practice of youth empowerment leads our alumni to aware and engaged lives. HabonimDror alumni actively support their communities both as Jews and as caring human beings.  Looking at the levels of leadership, community support, and long-term connections among our alumni, we are hopeful about our common future.”

Julian Renick, Mazkir Habonim Dror Olami offers, “As someone who knows the Habonim Dror community in both North America and in a number of other countries around the Jewish world, I am not at all surprised at the results of Professor Steven Cohen’s study. Not surprised and at the same time immensely proud.  As a graduate of what all of us alumni affectionately will always call “the movement”, I have all the anecdotal evidence I could want about just how much Habonim Dror has contributes to the intellectual and emotional development of its members, just how many of us learned the lessons of taking responsibility and taking action in areas we cared about.  As a previous Central Shaliach of Habonim Dror North America and currently as the Mazkir of World Habonim, I can only wish for our present Chaverim to make the same contribution to Israel and the Jewish People as so many of our Alumni have made in years past. I am confident that given the means to make this happen we in World Habonim via our office in Israel, the Shnat programs we run and crucially the shlichim we provide, will keep our Movement in the forefront of the great endeavor of the Jewish People in the modern era.   Alu Vehagshimu!

Yudie Fishman, Chair Habonim Dror Foundation notes, “It is gratifying to see that Prof. Cohen’s study concludes that the Habonim Dror Youth Movement has consistently provided an answer to the alienation from Jewish life that is a common experience among Jewish-American youth.  His application of demographic and statistical methods confirms what multiple generations of Habonim Dror youth movement members have experienced and continue to experience today.  It is my hope that the broader Jewish Community will take note and support Habonim Dror and learn from its success.”

Rabbi Vernon Kurtz, President Karen J. Rubinstein, Executive Director, American Zionist Movement says, “Even before there was a State of Israel, the Zionist youth movements were the training grounds for leaders, pioneers, and new and aspiring Israelis. Each classical Zionist organization had its ideological youth movement from HaShomer Hatzair and Young Judaea to Betar, Magshimey Herut and B’nei Akiva. In time, other youth organizations, such as NFTY, USY and BBYO joined the youth movement council. The Tzofim, the Israel Scouts, are now at work in the US as well. AZM is proud of the work and effort by our members made toward educating the next generations. A fascinating and revealing study of one of those movements, Habonim Dror, was recently completed by sociologist Steven M. Cohen, Research Professor of Jewish Social Policy at HUC-JIR, and Director of the Berman Jewish Policy Archive at NYU Wagner and Steven J. Fink, M.A., Senior Methodologist/Analyst, AVAR Consulting, Inc., Rockville, MD. The findings reflect the deep impact that the Habonim-Dror youth movement has had on a large numbers of its members, and the impact many of them have had and continue to have on the American Jewish community and civil society, as professionals, lay leaders, opinion molders and donors. The study deserves attention not only because of what it says about Habonim, which is fascinating, but also to encourage people to think about the importance of informal youth movements and summer camping experiences. We suggest that you take a look at the findings.”